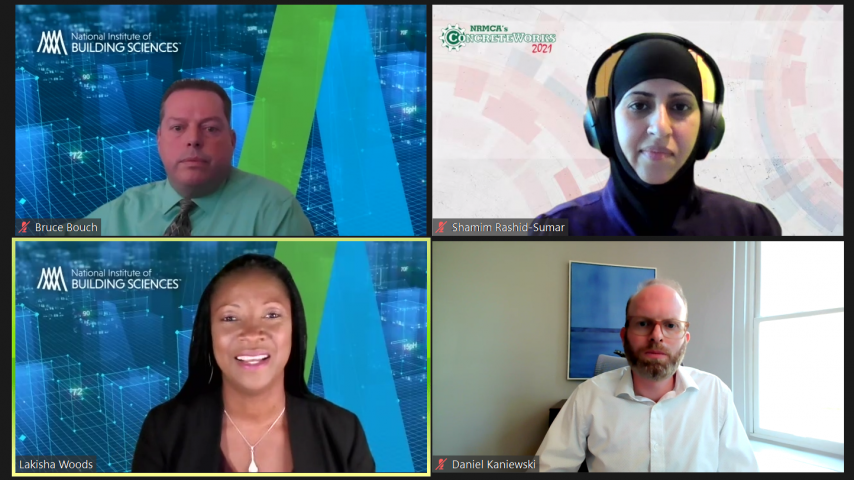 The latest United Nations report on climate change has made one thing clear– something must be done. Rising temperatures and an increase in drought frequency mean wildfires will continue to threaten our communities year-round.

According to the National Interagency Fire Center, there are wildfires across 15 states in the U.S. There have been 107 large blazes that have burned through more than 2.2 million acres. That is about 500,000 more acres than this time in 2020, when a total of 10.1 million acres burned. Nearly 100 large wildfires remain uncontained.

These devastating statistics make it imperative that disaster resiliency be on the forefront of the recovery efforts, says Lakisha A. Woods, CAE, President and CEO of the National Institute of Building Sciences.

On August 11, 2021, NIBS hosted the fifth installment of the Resilience 2021 webinar series, The Case for Resiliency in the Wildland-Urban Interface.

The panel covered wildfire causes and mitigation efforts, structural resiliency in the wildland-urban interface (WUI), building codes and standards for disaster preparedness, and costs associated with resilient design and construction.

WILDFIRES ARE A GLOBAL PROBLEM

The cost of wildfires is growing.

Rashid-Sumar pointed to information from Munich RE, a reinsurer, that says “there have been $23.1 billion in losses to wildfires in the U.S. in the five-year period between 2012-2019.”

2017 was a costly year, with $17 billion in losses and that number continues to grow because of climate change, which is creating warmer and drier conditions.

But wildfires aren’t a problem restricted to the United States. Rashid-Sumar mentioned other countries – Turkey, Greece, Lebanon, and Australia – all of which have experience with this deadly disaster.

Steps toward resilience in the WUI include:

Adopting updated building and WUI codes is the first step in wildfire resilient construction.  The 2021 International Wildland-Urban Interface Code (IWUIC) is model code, which supplements a jurisdiction’s building code. It addresses requirements for structure density and location, limiting the number of structures permitted in at-risk areas.

Similarly, NFPA 1144 is the NFPA Standard for Reducing Ignition Hazards from Wildland Fire.  It requires a wildland fire hazard assessment of structural ignition zones and has similar requirements for building design, location, and construction of new structures in the wildland.

Rashid-Sumar shared the case study of a home with a noncombustible exterior finish that was saved from a devastating wildfire in Laguna Beach, California in 2013. That wildfire consumed 17,000 acres of brushland and destroyed 366 homes. The home that was spared survived due to construction and landscape design: stucco cladding, Class A concrete tile roof with the ends sealed in concrete, double-paned glass, and fire-resistant landscaping.  She also shared a series of homes built of Insulating Concrete Form (ICF) Construction which survived wildfire devastation in a San Diego suburb.

CALIFORNIA HAS 11 MILLION PEOPLE LIVING IN THE WUI

Some communities may not be identified as being part of the WUI, but the risk of wildfire events still are present. Bouch defined the WUI as the “zone of transition” between unoccupied land and human development.

The United States Fire Administration is conducting an exploratory analysis of existing WUI data. The USFA is deeply engaged in the FEMA-wide effort to assess the impacts of climate change and adaptation across FEMA components and mission areas.

USFA actively has been socializing WUI and wildfire issues through this process, especially focusing on the critical role of the fire service to support prevention and community risk reduction of WUI risks in the context of climate change.

TOOLS AND RESOURCES TO ADDRESS THE CHALLENGES OF THE WUI ENVIRONMENT

Bouch pointed to forward-thinking tools like InciWeb, an interagency all-risk incident information management system. The system was developed with two primary missions: To provide the public a single source of incident related information and provide a standardized reporting tool for the public affairs community.

USFA is heavily engaged in federal interagency, intergovernmental, and private sector partner initiatives on a broad spectrum of WUI topics and issues. In that respect, the USFA is developing America Burning: WUI, a co-funded research project with the U.S. Department of Agriculture’s Forest Service and the U.S. Department of the Interior’s Office of Wildland Fire. The contractual support by the International Association of Fire Chiefs is helping to bring the project to fruition.  This report is building on the wildland issues raised in the original America Burning report of 1973.

The study will elevate national awareness on the highest level of the American WUI problem and inform potential priorities for future direction and activities.  The timely release of this report will be an excellent resource to address the challenges of the evolving WUI environment. It will be available by year-end.

“We’ve got to do better in collecting the data,” he said. “You have to have all the facts, all the information, and have one solid thought process so we’re all on the same page … so we can make the improvements, we can save lives and positively impact future generations.”

THERE’S MORE WORK TO BE DONE

“There’s more work to be done here,” Kaniewski said, adding that 16 other states have adopted the IWUIC on a local level. He also noted that FEMA hazard mitigation grant programs can help communities fund building code adoption and enforcement activities and other risk reduction projects and that these grant programs have recently received additional funding.

When it comes to incentivizing wildfire resilient construction, Rashid-Sumar offered some potential incentives that should be encouraged:

The panel offered some helpful sites:

The next Resilience 2021 webinar is entitled The Importance of Seismic Functional Recovery and Community Resilience in the Built Environment.

Nearly half of the U.S. population (150 million people) reside in portions of 42 states that are at risk of experiencing a damaging earthquake within the next 50 years. That’s according to the NIST-FEMA Special Publication Recommended Options for Improving the Built Environment for Post-Earthquake Reoccupancy and Functional Recovery Time.

In regions of high seismic risk, where an earthquake hasn’t occurred for some time, scenario studies predict deaths in the thousands, injuries in the tens of thousands, and hundreds of billions of dollars in direct economic losses, along with long-term, destabilizing impacts to community function.

Our nation’s seismic risk is largely mitigated through earthquake-resistant buildings, which are regulated by model building codes. Federal policy now calls for improving functional recovery of the built environment to increase earthquake resilience at the community level. Functional recovery design represents a significant shift from the current safety-based practice for the building design and construction industry.