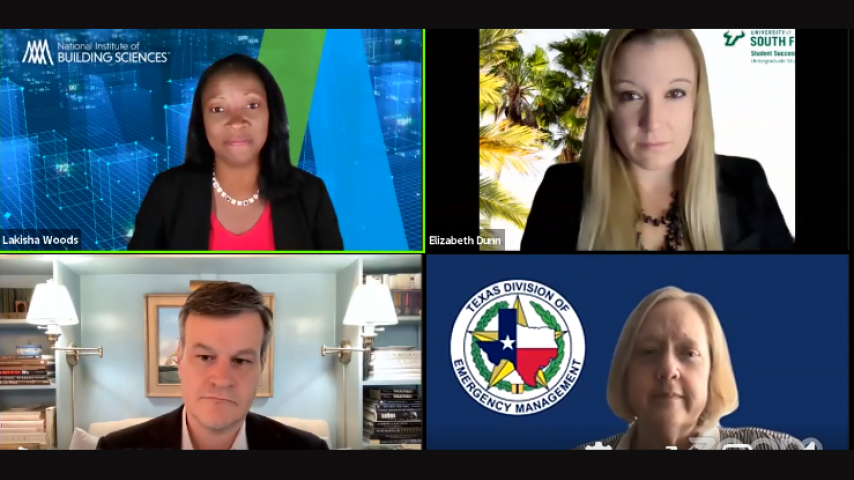 Will this year’s hurricane season be a record breaker?

Meteorologists from Colorado State University’s Department of Atmospheric Science anticipate a highly active season, predicting 17 named storms and eight hurricanes—four of which they predict will be Category 3 or higher.

The Weather Channel’s prediction is slightly different with 18 named storms and eight hurricanes—three of which it expects will be Category 3 or higher.

In 2020, the Atlantic Hurricane Season saw a historic year with 30 tropical storms, which included 14 hurricanes. The worst storm to make landfall was Hurricane Iota, a Category 5 storm that packed 160 mile-per-hour winds.

The season began June 1 and runs through November 30. Storms are forming as early as May, so it’s never too early to start preparing.

On June 23, we held the fourth installment of the Resilience 2021 webinar series, with our experts covering hurricane risks and mitigation, factors for storm strength, and the future of the Atlantic Hurricane Season.

Suzannah Jones, Deputy Chief of the Texas Division of Emergency Management (TDEM), says that since 1953, Texas has had 102 major disaster declarations. These are disasters that have required federal assistance.

“That’s one big disaster declaration once every eight months,” Jones said. “Things seem to be speeding up, when it comes to disasters.”

TDEM is responsible for the billions of dollars that come from the Federal Emergency Management Agency, in the form of disaster grants.

Storms have shown up early in the last few years.

So how does Texas make recovery quicker and response better? Mitigation and preparation.

Jones cited the NIBS Natural Hazard Mitigation Saves report, which breaks down the benefit-cost ratio of natural hazard mitigation, from adopting up-to-date building codes and exceeding codes to addressing the retrofit of existing buildings and utility and transportation infrastructure.

Jones mentioned that just one inch of flood water within a home can create $24,000 of damage.

Preparedness is key – making sure individuals, their families and home all are prepared.

Some of Jones’ advice on disaster preparation:

When it comes to insurance claims, they are paid whether you have a FEMA-level disaster declaration or not, Jones said.

Especially when it comes to vulnerable communities, a lot of information can be obtained through the local emergency management office.

The Resilience Accelerator of the Insurance Information Institute (III) is aimed at minimizing risk and speeding recovery.

“We want to create a resilience movement,” said Leonard. “We want people to think differently about floods and hurricanes … it’s about empowering stakeholders.”

Leonard said where there’s going to be elements of risk retention, the deductibles might be higher.

“Preparedness is central,” he said. “The insurance industry is a partner. It’s not just about tomorrow. We have many solutions that we can use right now.”

The COVID-19 crisis presented architecture, engineering and construction companies with an enormous challenge: transitioning an industry long reliant on personal relationships and in-person connections to a remote, digital environment. Like other hands-on sectors, builders and other trades can’t ply their trades over Zoom.

However, the pandemic accelerated the need to bring building sites into the digital era through automated tools. Digital technology played a critical role in getting the $11 trillion construction industry back on its feet. The shift seen in the building industry not only shows its resilience, but it is one of the major positive changes to emerge from the crisis.

Join us July 13, 2021 for the next Resilience 2021 webinar – The Pandemic’s Impact on Technology in the Built Environment.