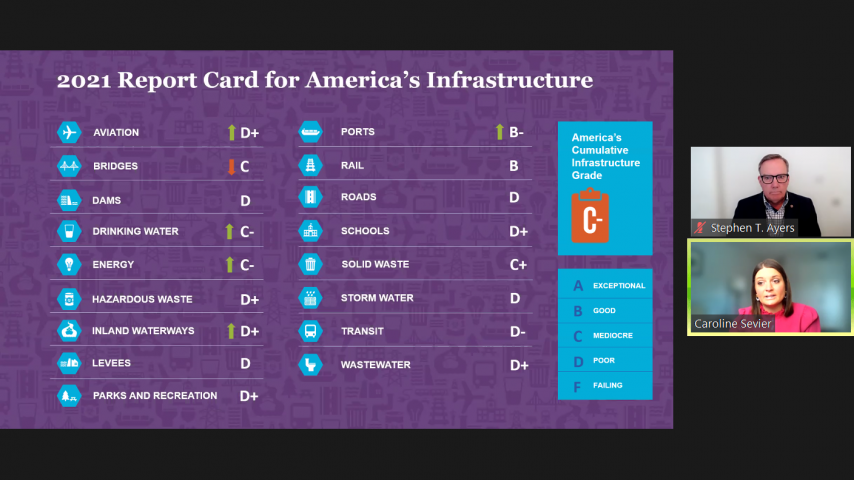 The passage of H.R.3684 – the Infrastructure Investment and Jobs Act or the Bipartisan Infrastructure Law – ensures daily commutes across metropolitan cities and small towns will be improved.

The law includes $1.2 trillion in total funding, reauthorizing surface transportation programs for five years and investing $110 billion in funding. The bill also guarantees $89.9 billion for public transit over the next five years between reauthorizations and new funding.

On February 16, 2022, the National Institute of Building Sciences hosted the first in a new series around infrastructure, covering Transportation Infrastructure: Your Daily Commute. We received nearly 400 registrants for the webinar.

Caroline Sevier, Director of Government Relations with ASCE, opened with a 2021 Report Card for America’s Infrastructure that topped out with a B for the country’s rail system and B- for our ports to mostly Ds with regard to aviation, hazardous waste, inland waterways, parks and recreation, schools, and storm and wastewater.

The lowest grade was a D- for transit.

Sevier said the nation’s bridges was the only category that saw its grade fall in 2021, to a C.

Necessary repairs will take into the year 2071, while “these bridges continue to age.”

Sevier added that a critical link for all communities is transit, which has faced significant challenges due to the pandemic with ridership declines, revenue shortfalls, and service cuts.

Forty-four percent of Americans also have no access to transit. One example – a ferry system in Alaska – could receive up to a billion dollars to improve that system, under the Infrastructure Investment and Jobs Act.

Prior to passage of the bill last year, a major funding gap of $2.59 trillion was assessed. The bulk of this gap was $1.215 trillion in surface transportation. The next highest priorities were water/wastewater/stormwater and schools.

“There are many projects that need urgent attention,” she said. “It’s going to take some time to make sure this is fully implemented. These are historic investments … federal agencies will be responsible for distributing billions of dollars.”

It will be up to states and local governments to prioritize projects.

IIJA directs more than half of its new investments toward improving and modernizing transportation infrastructure, Sevier said.

The largest piece of that pie goes to the nation’s roads and bridges, with $110 billion. Sevier said this is not an immediate infusion of funds; this will be a long-term investment.

ASCE’s priorities for implementation include projects that are dedicated to maintaining and improving existing assets, incentivizing asset management plans and lifecycle cost analysis, encouraging the use of the most up-to-date codes and standards, and providing technical assistance to rural and disadvantaged communities to guarantee an equal playing field for competitive grants.

Tatjana Kunz, Special Assistant for Policy and Implementation, U.S. Department of Transportation, said the Bipartisan Infrastructure Law is the largest investment in transit in history, including the single-largest funding amount toward passenger rail since the creation of Amtrak.

“Across the board, these investments will help us build a safer, more sustainable and more equitable transit system,” Kunz said.

These improvements will make roadways safer and reconnect our communities.

In addition to expanding public transit networks, IIJA also will bring more systems into communities that need them.

Also, the bill features a big impact on electrification, allowing more Americans to commute via electric vehicle. The law includes billions dedicated to electric chargers to be distributed within states as well as technical assistance for states to help get started with their electrification programs.

“At the end of the day, these investments are going to improve our daily lives by providing us options,” Kunz said.

“A labor shortage with the pandemic really is not a shortage, it’s a good jobs shortage,” Walker Mooney said. “Wages are not where they need to be, and they are often low.”

Walker Mooney pointed to the Good Jobs Initiative, which is being led by the Department of Labor and was unveiled in last month.

“It’s important to build a sustainable framework for workers to earn as they learn,” she said. “Jobs are really key.”

What makes for a quality job? Walker Mooney said it includes living wages and retirement benefits, paid leave, the ability to get skills training and progress in the job, and the right to a safe, healthy workplace free from harassment.