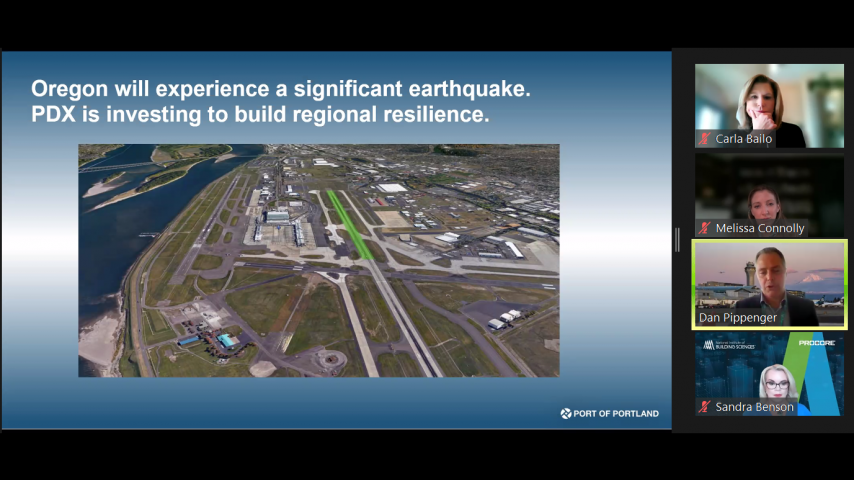 The Infrastructure Investment and Jobs Act will improve the way Americans travel, as well as how goods and materials are transported. With the current economic state occurring from a multitude of issues, improving our transportation infrastructure is more important than ever.

IIJA has earmarked $25 billion for airports, $66 billion for railways, and $100 billion in competitive grants for projects focused on moving freight. These grants will help unblock delivery channels and clear bottlenecked supply chains.

Electric vehicle charging infrastructure also will be addressed, with $7.5 billion in funding. Additionally, $5 billion is allocated for electric school buses and cleaner alternatives.

On April 19, 2022, the National Institute of Building Sciences hosted the next installment of the Infrastructure 2022 webinar series, covering how funds from IIJA will address the current and future infrastructure needs for Americans, their goods, and the ability to travel.

Portland is at the confluence of many transportation hubs.

Daniel T. Pippenger, Chief Operating Officer with the Port of Portland, said when it comes to infrastructure, Portland is focused on community uplift.

“It’s not just business interest and economic development only,” Pippenger said. “Now, it’s about who really benefits. We’re all in on infrastructure, and we depend on a system of infrastructure. Our infrastructure has to be adaptable and reliable. And it’s not today.”

Pippenger covered a lot of ground, discussing Portland International Airport (PDX) and what it stands to receive through IIJA.

In a typical year, PDX might receive $4 million from the Federal Aviation Administration. IIJA will increase this amount to nearly $20 million.

Pippenger said Portland will use the funds to catch up on much-needed projects at the airport, mostly airfield projects but also to help move people efficiently through the terminal.

PDX currently is undergoing a major, $2 billion airport terminal program that would allow the facility to meet future demand up to 2035. Part of the program includes a ground source heating system that would heat and cool the terminal, cutting its current energy use in half.

It also involves a seismically resilient runway in which NIBS provided a cost-benefit analysis. PDX secured a FEMA BRIC program grant of $3.75 million and similar funding from the state of Oregon. PDX is now finishing the design for the runway and soon will have to identify construction funding.

“A resilient runway in the Oregon metro region of Portland provides a 50:1 benefit,” he said.

IIJA: ADDRESSING PAST INEQUITIES IN INFRASTRUCTURE

Melissa Connolly, Assistant Vice President of Government Affairs with the Association of American Railroads, said IIJA not only addresses safety and sustainability, but also “past inequities in infrastructure.”

“It really builds systemic change in infrastructure,” she said.

Rail already is the most fuel-efficient way to move goods. Railroad jobs are well-paying, and rail has an incredible safety record.

IIJA has built in $66 billion for railways.

“We are really ready to work together and with state and local partners to see these rail projects get funded,” Connolly said.

Among the big programs: The U.S. Department of Transportation’s Mega, INFRA, and Rural Surface Transportation grants. Connolly said the DOT has combined these grants into a single application. The deadline is May 23.

After the panel covered other modes of transportation, Carla Bailo, President and CEO with the Center for Automotive Research, discussed how IIJA would affect automobiles.

She added that President Biden’s American Jobs Initiatives include $1 trillion in the Bipartisan Infrastructure Bill plus $3.5 trillion in the Reconciliation Bill. These will address jobs in the infrastructure, manufacturing, and innovation industries.

Regarding autonomous driving, Bailo said there have been a “lot of promises over the years.”

Bailo also covered different ways for consumers to charge electric vehicles. The most time consuming involves plugging into one’s home, and this process can take up to 12 hours. DC fast chargers are significantly faster, taking less than an hour to charge most passenger electric vehicles.

“These chargers take a tremendous energy draw, and our grid has to be ready for that,” she said.