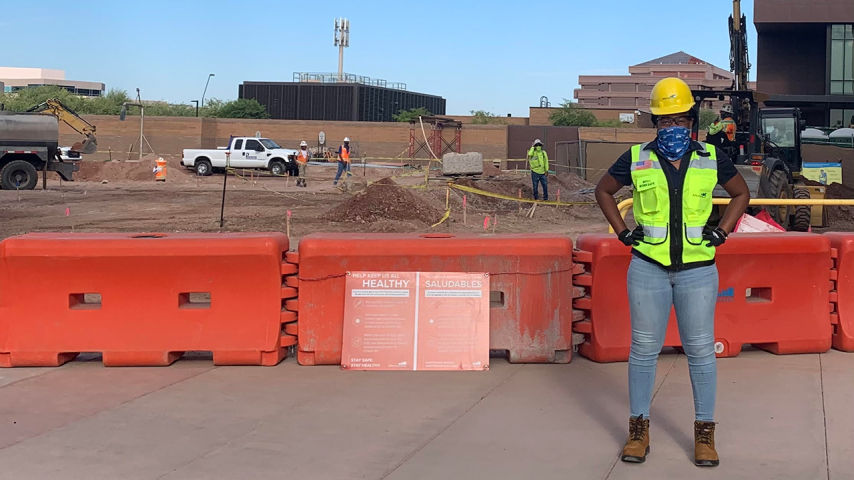 Antigua is 10 times smaller than Jamaica, with a population of 100,000 spread over 108 square miles.

It’s one of two major islands that make up the Caribbean nation of Antigua and Barbuda. Antigua contains a very sparse built environment – covered mostly in either concrete or undeveloped green land. There are just a handful of high-rises that reach a maximum height of five or six stories.

“My dream job would bring me back home to Antigua doing something that helps develop the country in a construction sense – development of the built environment and infrastructure,” said Jenna Greer, a fourth-year architecture major at Howard University in Washington.

In 2020, Greer won a Betty & Mortimer Marshall Memorial Scholarship award. Mort was the first member of the National Institute of Building Sciences.

The award celebrates the distinguished career that Mort enjoyed with Betty’s support, and a memorial scholarship was established to promote diversity in the building sciences and benefit students pursuing a career in architecture and engineering at a historically Black college or university. Greer won $5,000, which went directly to her tuition.

An Eye on Architecture

Greer remembers when she decided that architecture would be her future.

It was Career Day, and she was in the 4th grade. Her teacher became upset that Greer wanted to be an artist.

“She thought it was a waste of my potential,” Greer said. “I thought about a more serious career that would incorporate drawing, and I arrived at architecture.”

At Howard University, the architecture program continues to evolve since it was established in February 1911.

According to the university: “Architecture is fundamentally about problem-solving which results in design solutions informed by a variety of social, cultural, economic, environmental, and political factors. Students explore a range of architectural typologies, tectonics, and settings, and engage a broad perspective on the human environment. They are exposed to a myriad of opportunities to design efficient and aesthetically-pleasing built environments.”

Greer’s class is among the largest with more than 40 students at the start of each year. Two of her classes are 65 percent majority females to males.

Greer said her favorite part of school involves collaborating with classmates and feeding off of their energy and creativity.

Hoping for a Spring Return

Because of COVID-19, Greer virtually has been attending classes in Antigua. She said she misses DC, which has become her second home.

She plans to return to Washington by June to begin an internship with Clark Construction. There, she will be a Clark Associate, performing onsite activities and field engineering.

“I like the fact that you can get out of the office and survey the site,” she said. “I don’t care about getting a little dusty. The dustier the better.”