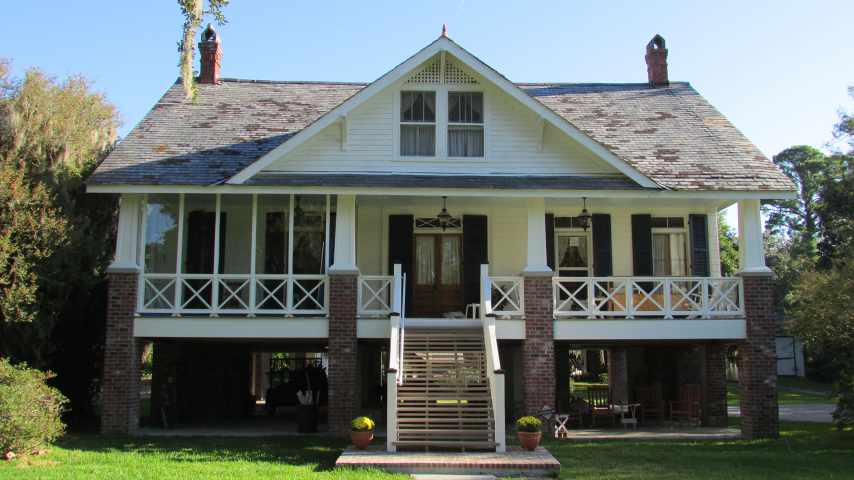 Mandeville, founded in 1834, sits on the north shore of Lake Pontchartrain across from New Orleans, just 26 miles to the south across the lake. The community flood protection consists of a 5-foot sea wall, while across the lake is a full levee protected set of communities. When the lake is stirred up, the water spills out on the north shore. The city participates in the CRS program, recently getting to a Class 7. Mandeville, located in the St. Tammany Parish, has a long history of hurricanes and flooding.

The storms in the early 1900s resulted in multiple 5- to 6-foot-high elevated homes, many built during the first timber harvest of the north shore. By the mid-1900s, the first slab on grade homes were showing up and after the historic Causeway Bridge was built in 1959 and the second span added in 1968, the race was on to build out the community at the north end of the bridge. More than 80% of the old historic section of Mandeville is in a flood zone with ground elevations going from 3-foot elevations to more than 9-foot farthest from the lake. Most of the city’s neighborhoods have open-ditch drainage, and some are covered. The NOAA hurricane path record for the Gulf of Mexico shows a lot of storm paths over recorded history.

Many of the early 1900s storm homes were built on open pier systems of brick. The vulnerable slab construction from the mid-century on was really flood vulnerable. The first flood insurance study took place in 1979 and was revised in 1982. The post-Katrina (2005) flood maps came out for review and approval by 2009 and then stalled out. Now, it’s 2022 and St. Tammany Parish still doesn’t have approved flood maps. The parish got FEMA Advisory flood maps post-Katrina that ended up two feet higher than the final approved maps. Mandeville appealed to FEMA and broke from the parish mapping to be one of the last communities to be allowed to have separate maps from the county/parish. Mandeville approved post-Katrina flood maps in 2012.

Mandeville took an aggressive approach toward becoming flood resilient, which is critical to sustain a developed community in a flood vulnerable area. Here is a snapshot of the community efforts to mitigate properties from flood hazards: In the late 1990s, a rain bomb flooded a 1980s subdivision. Several homes were subsequently elevated, and several were acquired and demolished, leaving a checkerboard pattern in the neighborhood. Then Katrina (2005) changed everything. The city was really lucky that the edge of the eye wall missed us by a just few miles, yet hundreds of buildings were flooded by the 9-foot surge. Katrina wasn’t the last time Mandeville saw 9-foot surges.

Hurricane Isaac (2012) and Hurricane Ida (2021) also brought 9-foot storm surges. However, thanks to the community’s efforts to mitigate buildings, just look at the progress, in terms of flood claims:

I have a saying: “Flooding happens, but flooded buildings don’t have to happen.”

Roderick Scott, CFM, is a long-time resident of Mandeville and chair of the Floodplain Mitigation Industry Association.